skip to main | skip to sidebar

New York, May 2 -- For the past five years, the New York City Department of Buildings has continually updated and revised its laws on skyscrapers, driven partly by lessons learned on safety after 9/11.

And each year, it has had a chance to make two particular revisions, which many firefighters, architects, professors, 9/11 survivors and engineers have long said could save more lives in a skyscraper catastrophe: wider staircases and more sets of them.

Each year, on the issue, the Buildings Department has done nothing.

“Wider staircases can mean the difference between life or death," according to Vincent Dunn, a retired, 42-year veteran of the New York City Fire Department. "These are people's lives, and you have a Department of Buildings interested in doing frills."

Walk into almost any skyscraper in this city and the staircases will be 44 inches wide, with three sets of major staircases. Experts say this width and this number of sets don’t offer enough room for the quick, efficient evacuation of thousands of tenants — when seconds are crucial — and cite much of what was learned in September 11th’s aftermath.

Over a dozen calls were put in to the Department of Buildings on the staircase issue over the last two weeks; spokespeople there promised to get back with answers, but the department never returned a single call. New laws on the staircase issue haven’t been passed, the Buildings Department has said in recent years, because it can’t gain “consensus” from those representing owners and developers, who stand to lose money on the potentially rentable space that would be lost if staircases were given more prominence.

But one building owner, Bank of America, and its developer, the Durst Organization, are doing things differently. They are taking the lead on staircase safety, surpassing city codes and forgoing the profit that could be made if they simply built to code.

Bank of America’s new 54-story headquarters near Bryant Park will have ideal staircases when it comes to safety, many experts believe.Larry Grayson, a Bank of America spokesman, said his company had employees who had died and survived 9/11 in mind when the bank decided to build the building and staircases this way.

One of those employees might have been Chris O’Driscoll, a former high level Bank of America manager who on the morning of Sept. 11 was on the 82nd floor of the north tower when the first plane hit. O’Driscoll escaped that day and in an e-mail message had this to say about wider staircases and his ordeal:

“If you wanted to evacuate a 100-plus story building in a hurry, then two abreast” — which is barely what 44 inches affords — “is not going to be sufficient. I believe if we had been aware of the possibility that the north tower was going to collapse, [many would have panicked and] it would have been much more difficult to escape within the confined space of the staircase. Any additional space would assist in the evacuation of a tall building.”

The staircases at the new Bank of America headquarters will be 66 inches wide, or 33% wider than what the city code requires, according to Jordan Barowitz, director of external affairs at the Durst Organization, the building’s developer.

According to experts, that’s enough room for three people to descend comfortably side by side and provides enough room for counterflow. An ideal example of counterflow is one in which firefighters can efficiently move up the staircases with heavy equipment as tenants fleeing walk down. Counterflow was a problem on 9/11 in the twin towers’ narrow staircases.

“I remember walking down the staircase two abreast,” O’Driscoll said, “and that once the firemen walked up we had to make way for them, so we progressed one at a time for a while. There were frequent delays….”

Bank of America’s staircases will be encased by two and a half feet of steel-reinforced concrete walls. After 9/11 the Buildings Department did mandate stronger materials be used for the encasing of skyscraper staircase walls — the twin towers’ were made of lightweight gypsum board and didn’t stand a chance on impact — but Dunn, the retired fire chief, said that there’s no higher standard than steel-reinforced concrete. He called Bank of America and Durst’s choice “impressive.”

The reinforced staircase will be located at the building’s center, its “core,” according to Barowitz. The core is one of the strongest parts of the building, meant to better preserve life-saving infrastructure, like staircases, in case of disaster. It’s a reaction to what happened on 9/11, Barowitz said.

“Our staircases in the core will be able to withstand a massive impact,” he said.

Furthermore, the Bank of America staircases will be air pressurized, which means if heavy smoke is circulating on one of its office floors, and someone on that floor opens the staircase door to escape, the choking smoke won’t follow him in. The staircase’s air is maintained at a higher pressure than the office floor’s and will essentially bar most of the smoke from entering.

Air pressurized stairs are not required by the city’s building code.

Barowitz said there will also be “safe havens” in the staircases. That is, at each floor, there will be an extra large landing. Disabled people or those who need to rest can take breaks as they evacuate and not hold anyone else up.

This extra measure is crucial, according to Glenn Corbett, professor of fire science at John Jay College of Criminal Justice.

“You need a place to attend to someone who can’t egress as quick,” Corbett said. “It’s not fair for one person to put others in the worst kind of danger when it can be avoided.”

Bank of America and the Durst Organization wouldn’t say how much money they could have made if the space devoted to more staircases was used for rentable space. Grayson did say this:

“One of our core values at Bank of America is ‘Do the right thing.’ The value of square footage potentially devoted to rentable space was far outweighed by the added safety afforded by the staircases designed wider than code requirements.”

With so many voices lined up for wider staircases, it may be hard for some to imagine why they haven’t been mandated in this city. But there are some reasons.

The counter belief behind not giving staircases more prominence is a fire-fighting strategy called “defend in place,” which essentially means, "If there’s an emergency, stay put.” If there’s a fire on the fifth floor of a skyscraper, tenants on 25 need not evacuate and potentially expose themselves to unnecessary risk, such as perhaps being trampled as they evacuate.

Accordingly, many of the buildings in New York City were built to contain fires to a single floor. The staircases were not meant to accommodate a large percentage of the building’s population, as they were forced to do September 11.

"If you have a building filled with 50,000 people, I don't care how wide your stairways are or if you have two or three major staircases,” said Ron Burton, vice president of codes, standards and regulatory affairs at Building Owners and Managers Association International. “It’s going to take a heck of a long time to get everyone out. We still, as we always have, believe in defend in place.”

Burton’s organization, which represents thousands of building owners, has been pointedly criticized in the past by fire safety experts, and has been accused of standing in the way of wider staircases.

“I don’t think it’s fair to say we’re ‘standing in the way of wider staircases,’” he said. “This is an ongoing, complex issue, and we’re all still exploring it. Obviously, we care about people’s safety or we wouldn’t be in this business.”

Still, Burton said, his building managers association believes that 44 inches are wide enough. His organization also believes that three staircases in skyscrapers are adequate because, again, every person shouldn’t be in those staircases in an emergency anyway, he said.

"High-rise staircases," he said, "are still designed based on the belief that a fire will be confined to one floor; therefore, they need not have the capacity to hold all the building's occupants in an emergency. But remember the Titanic and the limited number of lifeboats? Same idea. Staircase design is still based on the building being fireproof, which many in the fire service, including me, believe is no longer true."

Burton said that the only way his association would change its beliefs is if there were "cross-benefit analysis" — authoritative sources with hard proof, and much of it — showing that wider staircases and more sets of them are worth the extra financial and structural burden and make skyscrapers safer, which he is yet to see.

Dunn said that it’s about more than such analysis and meeting the minimal requirements, “The current New York City codes are just the letter of the law,” he said, “not the spirit.” 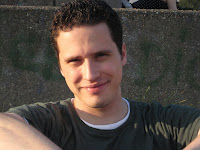 Chad Smith is currently pursuing an M.A. in journalism at New York University in the Reporting NY program. Growing up in Forest Hills, Queens, Smith has always been fascinated with New York City. The graffiti, the grit, the gossip, the haves, the haven’ts, the talented, the beautiful, and the ugly. Smith hopes to see it all and weave it all into his work. Before NYU, he wrote for several newspapers, most notably The Villager based in Downtown Manhattan, where he wrote investigative, hard news and arts pieces. Recently, Smith worked as a fact checker for Dow Jones, but he is more excited than ever to be reporting again.
Posted by Chad Smith at 10:53 PM